I always try to write a review by sharing a unique viewpoint. It may be a bit of history about an artist, a venue or even a personal experience that I share with you. The story that I want to tell in this review will contain all three-prongs of the above description. So I want to warn you, this article will be lengthy and personal. Stay with me, I think you’ll enjoy.

Several years ago, we’ll call it the MySpace Age, I was the national talent buyer at the old A1A Concert Hall in Lexington. I spent many hours searching for bands on MySpace. The venue’s capacity was only 500, so I really had to find bands that I felt had a bright future. Bands on the verge of breaking out of their hometown market and onto the national scene. During that time, I happened upon a band that I really enjoyed. Their name was Black Summer Crush. I reached out to them and we had a few exchanges about where they were in their careers and if they’d be touring anytime soon. At that time, they were only doing a few California shows. As life often does, we drifted our separate ways and MySpace got Facebooked.

Fast-forward a few years and I see this beer commercial for Jeremiah Weed. I really, really like the song playing in the commercial. It sounded so familiar to me. I began researching the internet and found the song was titled “Get Mine” by a band called Rival Sons. The band looked familiar, but the voice and face of Jay Buchanan was new. Turns out, after a few days digging on the somewhat primitive internet at the time, Black Summer Crush had changed vocalist and became Rival Sons. The feeling of familiarity that I had was the guitar tones that we all now know of Mr. Scott Holliday. As well as the “John Bonham” style drumming of Michael Miley.

I wasn’t able to find the commercial, but here is a documentary by Jeremiah Weed in that time period.

The next part of my story involves a Kentucky gentleman that I stumbled upon by following Rival Sons on Facebook and a chance introduction by a cousin. Former Hazard Bulldog standout basketball player, Greg Napier, had created a radio show and a series of concerts in Whitesburg in affiliation with WMMT and The Appalshop. Greg’s Sunday night show became a long-running staple for me as I ran my old website, Unsung Melody.

Now, what’s the point of all that information? I’m glad you asked. Greg introduced me to a guitarist that had made a name for himself in Nashville. He was independently releasing his first release as a band. His name was JD Simo and his band was aptly titled, SIMO. Through Greg’s radio show, I found out SIMO was coming to play a show for Greg. I went, loved JD and I’ve been a fan since.

I also met someone that night that I truly respect and am proud to call a colleague here at Capture Kentucky. Photographer Thomas Biggs serves, effectively, as the house photographer for all of Mr. Napier’s show.

Just before Rival Sons started catching some big breaks and building momentum as a band, Greg’s persistence and help promoting Rival Sons landed him the opportunity to host Rival Sons in Whitesburg. Their friendship and support of each other was solidified. A couple years later, Greg hosted The Sons in a bigger venue in Hazard, KY.

That leads to the why, how and who made the two-night stand (May 1st & May 2nd) in Whitesburg possible. A band that toured as the direct support to Black Sabbath on their entire final World Tour, came to a tiny mountain town all because of one man, his vision and the beautiful spirits of the people from my home.

Both nights were held in the 175-seat Appalshop Theater. I chose to make the trek back to my old mountain home for the 2nd night, all because Greg brought SIMO back to open the show. To say that the room was filled with love, all night long would likely be the understatement of 2018.

SIMO has certainly evolved since seeing him initially in 2014. You can read that review at Unsung Melody here. The band is now signed with Mascot Records and has toured internationally.

Two weeks ago, Thomas and I caught JD and the band in Lexington at The Burl.You can read that article here. This will sound crazy, but SIMO had been off the road a bit. They’d been “woodshedding” as bands like to call it. They had been holed up practicing and writing. In those two weeks, the set evolved. Please allow me to explain. I spoke with JD about this specifically because I made the comment that the set list’s dynamics changed drastically. There were sections that were played softly, then brought back in at full volume in a split second. It was jarring and it was fantastic. Just good ole blues-infused, sweaty, chicken-fried Rock ‘N’ Roll. Sooooo tasty!

Direct support on this short tour is an Arkansas project titled Welles, the brain child of frontman Jesse Wells. They’re a really young band that is full of potential. Their show sounded great, but as with many young bands, they haven’t fully developed their stage presence. That’s not a knock, but rather an observation. Greta Van Fleet is in a similar situation and with both of these bands, when their stage presence catches up with their talent, they’ll be unstoppable. The first single from Welles is titled “Seventeen” and it was by far my favorite track in their set. I look forward to seeing where their career leads. Check out their video below.

After an unexplained, lengthy break between the bands, the Rival Sons finally went onstage around 10:30 pm.

The band had an electricity about them like I hadn’t witnessed in my previous three shows. There was a hunger. A renewed passion. A fierceness. The band, until Tuesday, had not played a show in nearly seven months. Couple that with the fact that they put the finishing touches on their new album about 1 am down in Muscle Shoals, and if I can use a horse reference since the Kentucky Derby is tomorrow, the band was chomping at the bit to perform again.

And perform they did. The band kicked off the show with their classic “Keep On Swingin’.” Vocalist Jay Buchanan, barefoot, as usual, was absolutely explosive in his vocal attack and delivery. In my honest opinion, vocally, Jay never sounded better.

His overall performance in 2013 in Nashville was truly epic, so I’ve got to say that performance is still my favorite. Mainly because Jay had been sick for a few days. He was sweating it out though, determined to deliver. He told me later that night that he actually passed out a couple of times onstage. Much like Michael Jordan and his “flu game”, Jay also delivered like a true champion though.

Scott Holliday took the mic after a few songs to lead us all in a rendition of Happy Birthday, as Wednesday was apparently Jay’s birthday, which is why no one was upset about the aforementioned unexplained break.

Jay told a story about the first time the band played in Whitesburg. It seems Jay got into a little of the ole “Mountain Dew” when they played and put a small reference to being “moonshined” into the lyrics of “Secret.” That was the fuel for the fire, after that performance, Whitesburg was eating out of the palm of their hands.

Rightfully so as they tore through tracks like “Pressure & Time”, the breathtaking “Belle Starr” and a track from the first album titled “On My Way.”

There are four more songs that I simply have to mention. The song “Jordan” is a song that is incredibly special to me. It’s a song that I revisit often. I lost my Dad to cancer back on October 23rd, 2008. In October 2012, I was having a pretty rough patch missing him as that dreaded anniversary was fast approaching. Then, on October 20th (the day before my son’s birthday), I received a copy of the Rival Sons album “Head Down” to do a review for my old site, Unsung Melody. It was 5:11 am when the track “Jordan” began playing. I know this because this was also around the time of my Dad’s death. The beauty, the story, the emotions within “Jordan” broke me down, but it also helped me heal. I had held back tears for so long, that depression was winning. “Jordan” gave me the ability to feel and heal again. So for that very reason, I will always be indebted to Rival Sons for “Jordan.” This was only my second time experiencing it live. I was definitely a bit teary-eyed, especially being back home roughly 25-30 miles from where he is buried. I’m in a better place now, but I felt that maybe Dad was with me at that moment.

Sorry to bring down the mood there, but honesty and truth are what makes Capture Kentucky unique, so I felt that I needed to share my experience as a testimony to the healing power of music.

The last three songs I want to discuss, if I may use another Derby reference here, is what I call the trifecta. A series of songs that personify and embody what it’s like seeing Rival Sons live. ESPECIALLY in such a small room.

I mentioned earlier how the band had an electricity to them, during the trifecta stretch of “Torture”, “Electric Man” and “Open My Eyes”, the band was absolutely on fire. From the sing-a-long Whoooaaa’s and thundering bass line of Dave Beste in “Torture” to the fuzzed-out tones of the Orange Amps from Scott Holiday to start off “Electric Man” to the thundering Zeppelin-esque intro from Michael Miley, the sweet audiobed of sound/beard from good ole Todd the Mofo and Rival Sons was one helluva well-oiled machine hitting on all cylinders. My goodness! Have some mercy on us, fellas! Haha Those four tracks made everything else just icing on a beautiful cake. A wonderful night. A Historic night even. When a band from California the size of Rival Sons travels to a tiny mountain town to perform for two-nights in a 175-seat theater, well that just doesn’t happen everyday.

Certainly not trying to sound like a jerk here, but if you missed this opportunity…well, I feel pretty bad for ya. It was a unique experience that I’ll never forget.

As I always say, support the artists or lose the art. Go see these fellas on the road. Buy a CD, shirt or hat and let them know what their music means to you. 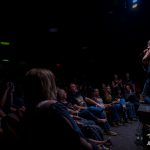